The IACA Biennial General Meeting held on May 5th, 2008 in Boston was conducted in conjunction with the Joint Colloquium sponsored by IACA, IAHHS, and PBSS. For the first time, three IAA sections joined together as full partners to conduct a Joint Colloquium. The Joint Colloquium was an outstanding success in nearly all respects. Of particular interest were several sessions focused on the expanding area of microinsurance, including presentations by many of the foremost experts in that field. Attendance was approximately 200 individuals from 34 countries. The only disappointing aspect of the Colloquium was the relatively low number of registrants from the U.S., which could have been improved by having better collaboration with some of the U.S. actuarial organizations.


This election included the implementation of a decision taken by the Committee during the past year to invite both the Association of Consulting Actuaries (ACA, UK) and the Conference of Consulting Actuaries (CCA, US) to suggest one of their members to be nominated as an IACA Committee member. The ACA and the CCA had accepted our invitation to name one of their members as a nominee to the IACA Committee and we appreciated their working with us to further achieve the objectives of the IACA Section. In addition, officers for the upcoming two-year period were nominated. The slate proposed by the Nominating Committee (and there were no nominations from the floor) was as follows:

At the same meeting, IACA also held a dinner to celebrate its 40th anniversary as an organization. Highlights of this dinner included remarks from Geoffrey Haywood, our Founding Chair; the awarding of the second Max Lander Award, named in honor of one of IACA’s founders and given to an actuary who has contributed to the public awareness of the actuarial profession and to the promotion of the business of actuarial consulting; and the passing of the gavel of leadership from Michael Toothman to Hideyuki Yoshida. Hideyuki became the first Asian to assume such a position of leadership of an IAA section.


The recipient of the second Max Lander award was Paul Thornton (UK), an outstanding contributor to actuarial consulting over his career and continuing into the present as the President of IAA (January 2010). The inaugural recipient of this award was Jim MacGinnittie (US), two years ago in Paris.


The following are the summaries of activities for each functional subcommittee (2008 – 2010).

The Committee had finalized its Terms of Reference, Objectives and Action Plan for the years 2009 and 2010, which were later approved during the IACA Executive Committee meeting on May 30th 2009 in Tallinn. The Committee had proposed for itself a very forward looking and aggressive plan and aimed to shore-up the Actuarial Consulting globally within a two-year timeframe.

A significant number of members did not have e-mail on the IACA data records. Over November and December of 2009, with the help of Society of Actuaries in the US and the Institute of Actuaries in UK, efforts were made to obtain e-mail ids with considerable success.

Christian Levac at the IAA Secretariat is personally involved in the redesigning of the IACA Section Website. The following were the proposed changes:

• Enabling survey of members so as to obtain feedback on members’ level of satisfaction with IACA offerings, need for seminars/workshops/webinars and similar events.
• Hosting Directory of members’/consulting firms.
• Hosting Library of past convention papers (already in progress by Christian), Papers and Presentations.
• Enabling high degree of networking.
• Enabling IACA leadership to achieve high degree of Public Relations with membership.

Publications & Research Committee
Andrew Vaughan continued to serve in the leadership role as Chair of this subcommittee where he had previously been responsible for producing a members’ newsletter and other information.
Other objectives for this subcommittee include:
• Prepare a newsletter on a regular basis, possibly linked to the IAA newsletter, and posted on the website
• Publicize the professional and technical papers and presentations from the Joint International Colloquia and meetings
• Co-ordinate content between the websites of IACA and other IAA Sections

A project is in progress to write a brief history of IACA and an outline of plans for the future development of IACA with a goal of publishing a booklet ready for distribution at the time of ICA2010 in Cape Town.

As part of researching IACA's history all of the main Committee's minutes are in the process of being archived and loaded onto IACA's website along with as many Transactional papers as possible from the biennial meetings that have taken place over the years.

Article 2 implies that IACA should fulfill a role of helping in countries or regions in the development of actuaries as consultants and by helping to establish and develop a forum for consulting actuaries either within IAA member associations or as a separate association, and to encourage the formation of an IAA member association where there is none. These objectives may be best accomplished in co-ordination with the IAA Advice and Assistance Committee. The Global Development Committee will also work in cooperation with the IAA Supranational Relations Committee, the International Social Security Association (ISSA), the World Bank, and other relevant organizations.

On January 8th, 2009, Ken Hohman, Nick Salter, and Hideyuki had a conference call. The objective of this meeting was that before discussions were activated on this topic in the Global development committee, Hideyuki felt that it would have been helpful to understand the operations, objectives, and history of two existing actuarial consulting associations in the USA and the UK. There was much to have been learned from the existing, well-established actuarial consulting organizations -- ACA (UK) and CCA (US), who operated under slightly different models. Ken and Nick provided presentation materials concerning ACA and CCA. At the Global Development Committee conference call held on February 24th, 2009 there was an interesting discussion. Hideyuki planned to utilize the EAAC Conference in October of 2009 in Korea for the forming of the new organization – the Asia Pacific Regional Actuarial Consultants Organization. There was a need for a task force (Asia Pacific Task Force, who later became the founding committee of APACA) to establish this organization that was discussed at the meeting in Tallinn. Upon the establishment of this organization, the next regions in line were Latin America and Africa. Ken Buffin had been appointed as the IACA delegate to IAA’s Advice & assistance committee.

Other Conventions and Colloquia

IACA representatives participated in the PBSS Colloquium held in Tokyo, October 4th - 6th, 2009, and in the 15th East Asian Actuarial Conference (EAAC) held in Seoul on October 12th – 15th, 2009. Separate sessions were designated for IACA in each of these two conferences. The respective presentations are available at http://4thpbsstokyo.visitors.jp/index.html and http://www.eaac15th.org. During the EAAC proceedings in Seoul, a special inaugural meeting was held to launch the Association of Asia Pacific Consulting Actuaries (APACA).

In fulfillment of the IACA Committee decision, the Asia Pacific Association of Consulting Actuaries (APACA) was formally inaugurated with a presentation by Chair, Hideyuki Yoshida, during the 15th EAAC in Seoul on October 14th, 2009. The inaugural meeting was well attended and featured brief supporting speeches by Ken Buffin, Stuart Leckie and Liyaquat Khan.
The founding members of APACA are shown in table below.


The UK Association of Consulting Actuaries Chairman Keith Barton invited IACA delegates to attend their members’ conference scheduled on Thursday the 4th, and Friday the 5th of February 2010 at Gatwick UK to give presentations on international consulting matters. The general theme of the conference was “Facing the future”. Chairman Hideyuki Yoshida accepted the invitation and traveled to UK to attend the conference. On the first day, he gave a presentation with the title “The Day After Tomorrow for the Asian Life Insurance Industry, Pensions, and their Implications to Actuarial Consulting “. This presentation is available at
http://www.actuaries.org/IACA/Documents/ACA_APACA_Presentation.pdf
and
http://www.actuaries.org/IACA/Documents/ACA_APACA_Presentation_Summary.pdf

Hideyuki had also taken initiatives to strengthen the IACA Committee’s convention functions to prepare for the upcoming IAA-related conferences. The most important of these were the IACA meetings and events during the 29th ICA in Cape Town, and the year 2012 Joint colloquium with PBSS and IAAHS. The IACA nominations committee was activated by having its first conference call on January 28th, 2010, and a subsequent one on February 9th, 2010 to prepare for the election of new committee members at the General Meeting scheduled on March 8, 2010.

A joint Colloquium of IACA, PBSS, and IAAHS was proposed in May 2008 to be held in India in 2012. Following a discussion that took place in Hyderabad in November of 2009, regarding certain criteria for hosting and selecting locations for joint colloquia, the three Sections decided to reconsider the matter and proceeded with deliberations in a series of conference calls. Ultimately, in late December, 2009 the three Section chairs concluded that India was not a viable option and directed the IACA Committee to seek other destinations. The APACA executive committee discussed this matter, and at a following meeting of the three Section Chairs, Singapore and Hong Kong were suggested as possible destinations. After contacting the two actuarial associations in Singapore and Hong Kong, the IACA Committee received favorable responses expressing interest in hosting the 2012 joint colloquium from both associations. We expect to make a selection of the preferred destination on March 8th at the IACA General meeting with the agreement of the leadership of PBSS and IAAHS.

In addition there will be a general meeting, a meeting for the new IACA committee, a dinner for committee members and a lunch for all IACA members.

At the Biennial meeting in Cape Town, Hideyuki Yoshida will pass the gavel of leadership to his successor, who will continue to lead IACA to meet the new demands of a rapidly developing world; as well, a new recipient of the Max Lander award will be announced. IACA will continue to expand; it will create more functional committees, organize events and conventions to meet the new demands of an ever changing world. IACA will provide consulting actuaries with the collaboration tools networking opportunities needed to continue to be innovative and acquire the necessary expertise. With this, we actuaries can help our clients make sound decisions and respond effectively to change. In order to do so, it will require the effort of not just a few regions, but of all of the knowledge in the world combined, in one collaborative effort to pave the way to a promising future.
投稿者 アクチュアリー 世界に羽ばたけ日本人理系金融マン 時刻: 21:49 0 件のコメント: 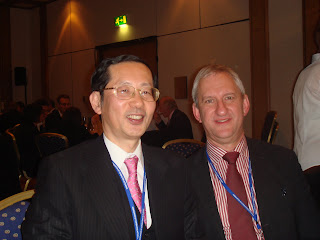 前回のブログから、１ヶ月が経過してしまった。その間、やはり英国コンサルティング協会(ACA)での発表準備に相当の時間をとられてしまった。APACA諸国の委員に協力を要請して、金融危機後の保険業界のインパクトとその後の回復ぶりについて、各国の統計データで示してもらって、それを１５０ページのスライドにまとめた。タイトルは、「The Day After Tomorrow for the Asian Life Insurance Industry, Pensions, and their Implications to Actuarial Consulting 」とした。年金についても、各国に要請して、それぞれ３ページほど追加してもらった。ちなみに、日本は、アクチュアリー会の杉田副理事長がお引き受けいただけた。２月３日に成田を出発して、同じ日の夕刻にヒースロー空港に到着し、そこから高速バスで、Gatwick空港のヒルトンホテルに２時間くらいかけて移動した。その日は、疲れてはいたが、ACAの会長のKeith Barton氏に晩餐会の招待をうけていたので、８時から１１時くらいまで懇親をして、翌日以降の段取りの打ち合わせをした。
翌日の２月４日の午後から、IACA Sectionの発表が始まった。私は３番目で、１５０ページのスライドを１時間英語で話すのは相当大変だった。でも、結構の質問がでた。時間の関係で、最後はclosing Remarksでまとめておいた文書を読み上げて締めくくった。その日の晩餐会は、相当に盛大なものであった。３００名位の英国のコンサルタントが、出席した。写真は、Keith Barton会長と撮ったものである。ロイヤル・トーストという表現を、そこで初めて経験した。トースト ツー クイーン（女王陛下に乾杯）という言葉で全員が乾杯する。日本では、考えられないことだが、これが英国の伝統というものなのだろう。翌日の２月５日からが、ACAの英国の本会議で、朝の９時頃からの開始であった。最初は招待講演で、Nigel Waterson氏で、政治家のShadow Pension Ministerが英国の年金制度の改革の方向性について語った。その後で、私に順番がきてAPACAの創設についてIACAの会長としてスピーチをした。聴衆は、イギリスのコンサルティングアクチュアリーだけで、３００名ほどいた。夕刻は、Kay Carberry女史(assistant General Secretary, Trade Union Congress)が、Challenge for good employersと題して招待講演された。前日もそうであったが、英国のコンサルティング協会は、政治家との接点がある。日本では、まだまだ政治家とアクチュアリーとのロビーイングは、行われていない。
初日の私の講演のクロージング・リマークは、以下の文面のとおりである。
The financial crisis revealed weaknesses and flaws in the regulatory and risk management systems of companies. Many financial companies failed to mitigate the risks presented by the financial crisis despite having these systems.
This also holds true for the Asian financial market as indicated by statistical data throughout the period. As a result, Enterprise Risk Management is now the main focus for implementation and operating efforts of insurance companies. Regulators have also tightened measures in minimum capital requirements following developments such as Solvency II in Europe.
Fears of a global recession saw the need for International Cooperation in order to revive the world’s financial systems. This called for the involvement of the G20, rather than the original G8 countries. In addition to the original G8, the new G20 (19 countries and the EU) now includes additional countries, with the most number of countries coming from Asia. These additions are Australia, China, India, Indonesia and South Korea.
The effect of the financial crisis on the Asian insurance industry was relatively mild with indicators revealing signs of recovery as early as 2009. With proper risk management and by bringing relevant actuarial expertise, we can ensure a thriving market for actuary consulting in the continued development of the overall Asian insurance industry.
投稿者 アクチュアリー 世界に羽ばたけ日本人理系金融マン 時刻: 20:31 0 件のコメント: