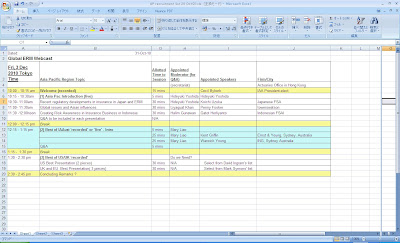 At today's conference call meeting, it was discussed that we should consider postponing the webcast to the week of 11-14 January 2011.  AP members,  if there is any reason why that week is not suitable, such as public holidays in your country, please let me know by next Monday.

Below are the brief notes of the conference call meeting, 29 Oct, 6 pm (Tokyo time):
Attendees: Hideyuki, Liyaquat, Mark and Pat

(1) To allow more time to prepare and market the webcast, it was agreed that we would postpone the webcast to next year.  A suggested time is the week of 11-14 Jan 2011 (10 Jan is a public holiday in Japan).    Mark hopes to have the webcast date confirmed as quickly as possible as he plans to start preliminary marketing of the event .  Pat should contact AP Committee members to get their feedback on the proposed timing as early as possible.

(2) The speakers of the AP live sessions have been recruited.  Hideyuki will follow up with Mary on the presentation titles of the Australian speakers.

(4) To facilitate the marketing, Hideyuki and Mary will work on coming up with a description of the AP session.

(5) Jacqunette  is expected to  have a discussion with the heads of each region next week to finalise the webcast date.

► For AP session (live)
• Choose from topics of Financial Risks, Other Risks, Regulatory issues plus 4 topics proposed by Mary:
1. operational risk is becoming an increasing area of focus for insurers
2. lessons learnt from the GFC in terms of effective and ineffective risk management
3. the role of risk appetite, and how to cascade from Boards to the business (Kent Griffin, E&Y)
4. harmonising risk measurement across banks and insurers, both from a regulatory perspective and internally as financial conglomerates are dominating the financial services industry in Australia (Kent Griffin, E&Y)
• Allocate 50 mins to regulatory and 50 mins to no-regulatory issues.

APACA 3rd Executive Committee meeting
Minutes (as approved by circulation)
Date: 15 09 2010
Time: 18:30 hrs to 19:30 hrs (Tokyo Time)
Modus: via concall
Agenda
1. Welcome and Roll call by Hideyuki Yoshida
Members present;
1) Hideyuki Yoshida, Japan - Chair
2) Liyaquat Khan, India - Executive Director
3) Patrick Cheah, Malaysia - Member
4) Haris Sontoso, Indonesia - Member
5) Yin Lawn, Taiwan - Member
6) Andrew Leung, Thailand - Member
7) Adrian Waddingham, UK - Advisor
Members not present;
1) Ken Buffin
2) Ken Hohman
3) Nick Salter
4) Grace Jiang
5) Martin Stevenson
6) Wong Ka-Man
7) Mark Saunders
8) Ken Sugita
9) Risza Bambang
10) Chan Young Han
11) Gavin Maistry
2. Confirmation of the minutes of the 2nd EC meeting held on 23rd March 2010 - by Liyaquat Khan
The minutes having been approved by circulation earlier, were taken on record.
3. Activity Status Report since 2nd EC on 23 03 2010 - by Liyaquat Khan
The Agenda Note circulated was discussed and taken on record.
4. APACA Membership status and Action Plan - Liyaquat Khan
2
The Agenda note (excel sheet giving member status and target numbers) was discussed. Key deliverables;
 Target number of members by Dec. 2011 for Indonesia was large and Haris suggested it to be reduced to 25.
 Target numbers in respect of other APACA Region countries to be revised in consultation with respected EC members from those countries and the actuarial associations.
 It was suggested and agreed that letter to IACA members from APACA region countries who have not yet become APACA members, be sent confirming that they have been enrolled as APACA members at no cost, but if they did not want to be so, should say so.
 Issue of APACA members’ value proposition came up and it was agreed that this aspect be articulated so that existing and prospective APACA members should clearly know what-is-in-it for them. The letters to be sent to prospective APACA members should clearly spell this out.
 It was taken on record that good number of persons have applied for APACA membership without being IACA member. It was decided that the invitation letter as has been sent by now be modified to include better clarity on this aspect.
5. SOA AP Region ERM Webinar 3rd Dec. 2010 – Hideyuki
Hideyuki briefed. The role of AP ERM committee is to resource presenters on topics agreed to and other aspects such as financials and marketing will be taken care of by the Central Organising Committee, hosted by Society of Actuaries in the US. It was decided that Liyaquat will request each APACA EC member to find potential speakers from his/her countries ASAP.(Likely to be consultant, but Industry speakers are also welcome.)
6. Seminar on Life & Family Takaful organised by Actuarial Society of Malaysia in December 13-14, 2010 – Patrick Cheah
Patrick briefed. APACA region EC members be requested to market it.
7. 13th GCA, Feb 2011, Mumbai India – Liyaquat Khan
Liyaquat Khan briefed.
8. 16th eaac , Oct. 2011 – Patrick Cheah
Patrick briefed that a draft skeleton program has been drawn up and will be forwarded to EAAC after deliberations by the EAAC organizing committee. This should be given out sometime end of October.
9. y2012 Jt Colloquium in Hong Kong – Wong Ka-Man./Hideyuki
In absence of Wong Ka-Man Hideyuki stated that the subject was discussed in the previous IACA Committee meeting and he would circulate the minutes to APACA Executive, when available.
3
10. Any other matter.
None
投稿者 アクチュアリー 世界に羽ばたけ日本人理系金融マン 時刻: 22:06 0 件のコメント: